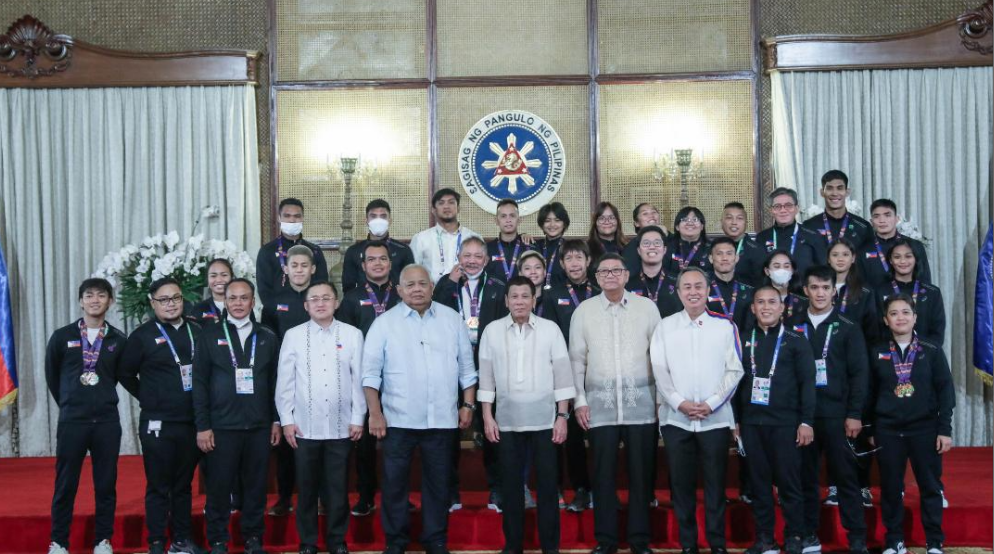 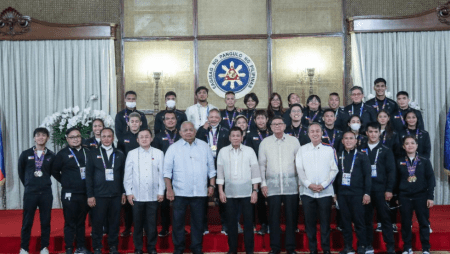 Filipino athletes who brought home medals from the 31st Southeast Asian (SEA) Games in Hanoi, Vietnam were happy and thankful to President Rodrigo R. Duterte who doubled their cash incentives and boosted their morale with a heartwarming message in a recent awarding ceremony in Malacañang.

The President, in his message, lauded the exploits of the national athletes.

“Please know that I really recognize all the tedious preparations you have made to perform your best in this regional sports competition. Just like a father to every Filipino, I am very proud of you, I wish you all a good life para sa ginawa ninyo sa bayan (for everything that you do for the country). I would like to say to all of you, maraming, maraming salamat (thank you very much).”

Under the Republic Act No. 10699 or the National Athletes and Coaches Benefits and Incentives Act, a SEA Games individual gold medalist will receive P300,000 while the silver and bronze winners will claim P150,000, and P60,000, respectively.

But President Duterte, known for his generous goodwill, matched the P34,537,500 total cash incentives for the 52 gold medals, 70 silvers, and 105 bronzes that Team Philippines hauled in the biennial meet.

Thus world champion gymnast Carlos Edriel Yulo came out as the biggest beneficiary of the President’s generosity as he collected five golds and two silvers in men’s artistic gymnastics.

Philippine Sports Commission (PSC) Chairman William “Butch” Ramirez, who led the delegation’s courtesy call at the Palace, said: “President Duterte was very pleased by the performance of our athletes in the last Vietnam SEA Games, and doubling their incentives is his way of recognizing and showing his appreciation for their efforts.”

She also personally received from the President the Order of Lapu-Lapu with the rank of Kamagi along with other medalists who were not recipients of the citation during the incentives ceremony for the 30th SEA Games that was also held at the Palace in 2019.

Petecio, 2019 Aiba Women’s world champion, also said that athletes like her could feel the love of the Duterte administration to them.

“Solve ang kakapoy ug tanang sakripisyo namo kay grabe ang ilahang suporta sa amoa. Maka-happy kaayo (All our tiredness and sacrifices are worth it because of their support to us. It really makes us happy),” she added.

Awarding Filipino athletes, doubling their cash incentives, and talking casually with them in Malacañang will be the last time he’ll be able to do so before he ends his term on June 30.

But the legacy he leaves behind will forever be etched in the hearts of every athlete who will continue to represent the three stars and the sun abroad.