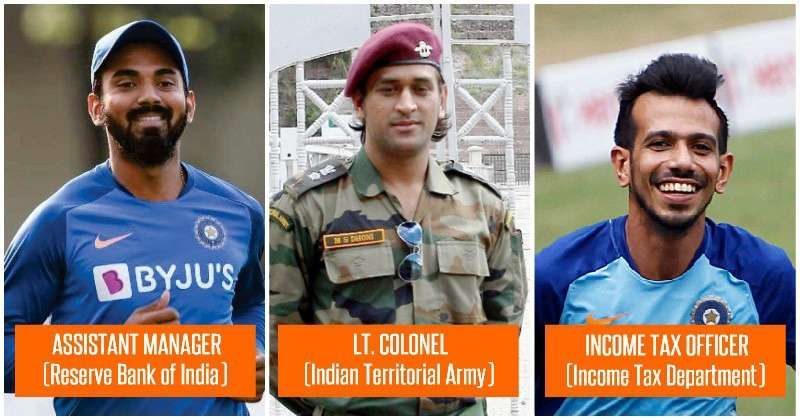 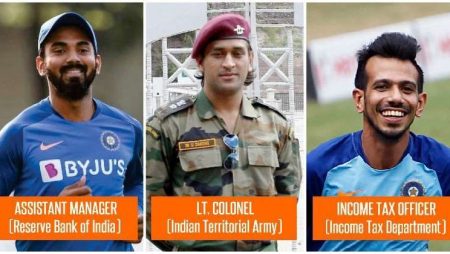 Wondered ever what your favorite cricketers are doing apart from cricket? It is a matter of pride to play for the national team and it has some perks as well. We all know that cricketers struggle a lot to reach that level. Indian Government not only addresses that but also rewards players’ achievements by offering them government jobs. Many famous Indian cricketers are serving their country apart from cricket like that. In this article, we will discuss the top 5 Indian cricketers who hold high-ranking government jobs.

KL Rahul made his international debut in 2014. He is a right-handed wicketkeeper-batsman who opens for team India. We all know how he emerged as the most reliable batsman for the Indian team. Currently, he is vice-captain of the Indian team in all formats. He is well known for his disciplined batting. Right now, KL Rahul is the captain of Lucknow Super Giants in the IPL. We have seen the brilliance of his captaincy when he was captain of the Punjab Kings. He gained popularity from his performances in the IPL. Rahul has 3889 runs to his name in IPL with an average of 48.01.

In 2018 Indian Government rewarded this player’s achievements by offering him Assistant Manager at the central bank of India.

Joginder Sharma played his last international match against Pakistan in the 2007 T20 World Cup final. He helped India to win that nail-biting thriller. He defended 12 runs against Misbah Ul-Haq in the final over which helped India to beat Pakistan by 5 runs. Joginder Sharma picked up 2 crucial wickets in that match and spent only 20 runs in his 3.3 overs. He also played for Chennai super kings from 2008 to 2012.

His performance not only made him a hero for all Indian sports lovers but also earned him a reward of 21 lakh money from Haryana Government. Later in October 2007 Haryana Government also rewarded him with the Deputy Superintendent post in Haryana Police. As of June 2020, he is a Deputy Superintendent of Police located in Pehowa in the Kurukshetra district of Haryana.

Former skipper of Indian team Mahendra Singh Dhoni is the ideal of all youngsters. He is quite famous among the fans as “The Best Finisher”.  Dhoni made his international debut against Bangladesh in 2004. Nobody would have thought that this player will write a new page in cricket history. Dhoni become the captain of India after Rahul Dravid stepped down as a skipper. Experienced players like Sachin Tendulkar and Rahul Dravid himself recommended him for captaincy.

Indian Government awarded him by offering him the post of Lieutenant Colonel in the Indian Territorial Army in 2011. Dhoni is part of the Parachute Regiment 106 Para TA Battalion in the Indian Army. After completing five parachute jumps from Indian Army aircraft in the Agra training camp, he became a qualified paratrooper in 2015. He retired from international cricket in 2019 after India lost the semi-final against New Zealand.

Chahal emerged as the deadliest spin bowler for India. He made his fixed spot in the Indian team with his effective and economical bowling performance. His stats say it all as he picked up 118 ODI wickets in just 67 games and his economy is under 6. His best figure in ODI is 6/42. In T20 he has 80 wickets in 65 games to his name and his best figure is 6/25.

For his great service in cricket, the Indian Government rewarded him with an Income tax inspector post in 2018. Very few people know that Chahal also represented India at the World Youth Chess Championship. But he gave up the game later when he struggled to find a sponsor. He is listed on World Class Chess Federation’s official website.

This name in the cricket world can never be forgotten. Sachin Tendulkar is known as the “God of Cricket”. He is also famous among cricket fans as the “Master Blaster”. He started playing cricket at a very young age.  A 16-year-old boy debuted against Pakistan in 1989. Words are not enough to describe what he did for India in his 21 years long career. All we can say about him as he is a man who believed in himself and his dream more than anything.

He holds the record for most ODI runs in cricket history. He has 18,426 ODI runs to his name with an average of 44.83. His highest score in ODI is 200 and has 49 ODI centuries. It is impossible to break his record as playing with consistency for so long is not an easy task. He was part of team India’s world cup winning team in 2011.

All these personalities of cricket taught us many lessons in life. What’s there you can’t learn from these cricketers? Dhoni and Sachin are always going to be the ideal for young generation. They inspired many people to achieve the goals of their life.

Do what you love to do in your life and give it everything. You can learn it from Dhoni as he gave up on the ticket collector’s government job and focused on cricket. Very few people know that Sachin got failed in 10th standard. Education is necessary but without a goal, it’s useless. So, make a goal in your life and focus on it.